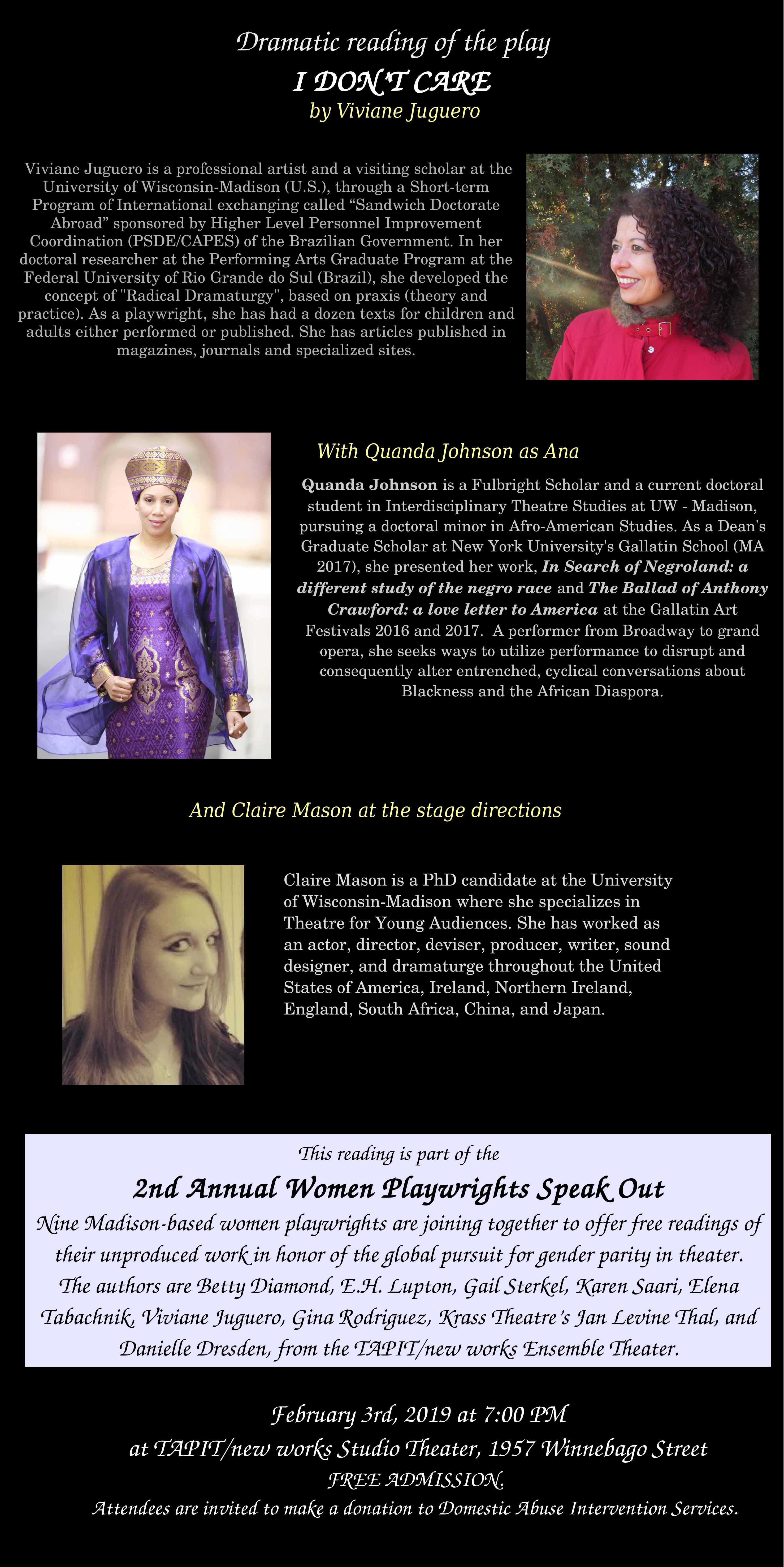 Attendees are invited to make a donation to DAIS (Domestic Abuse Intervention Services).

“I don’t care” at the 2ndAnnual Women Playwrights Speak Out

The play “I don’t care”, by the U.W. Madison visiting scholar Viviane Juguero will be read one more time as part of her doctoral researcher.  The play is about Ana, the protagonist of this contemporary monologue that counts on other characters who appear only as audiovisual images. The author works both with racial and gender themes, from a radical perspective, targeting the adult audience. The reading will happen at the SECOND ANNUAL WOMEN PLAYWRIGHTS SPEAK OUT, hosted by TAPIT/new works Ensemble Theater and co-sponsored by Kathie Rasmussen Women’s Theatre (Krass), in honor of the global pursuit for gender parity in theater. The authors who are going to have texts read are Betty Diamond, E.H. Lupton, Gail Sterkel, Karen Saari, Elena Tabachnik, Viviane Juguero, Gina Rodriguez, Krass Theatre’s Jan Levine Thal, and Danielle Dresden.

At UW-Madison, Viviane Juguero already has presented a colloquium about the concept of radical dramaturgy at the Interdisciplinary Theatre Program, and a workshop for undergraduates and invited professionals. She also has premiered the animated cartoon “Jogos de Inventar” for babies and toddlers at the Overture Center for the Arts and Madison Children’s Museum, sharing the radical principles that bases this work at the end of those exhibitions. The play “I don’t care” has also been read at the meeting of the group Playwrigths’Ink, on January 21st, 2019.
To end her period in Madison, Juguero will present the talk “Race and Gender in a Radical Dramaturgy for Children” at the symposium “Women Theatre Artists” of the Department of Afro-American Studies, on February,  15th, at   4:00 PM (counting on Éder Rosa to finish the event with Brazilian Music), and “The concept of Dramaturgy”, at the Playwrights’ Ink meeting, on February, 18th, at 7:00 PM.

The event is free. Attendees are invited to make a donation to DAIS (Domestic Abuse Intervention Services).