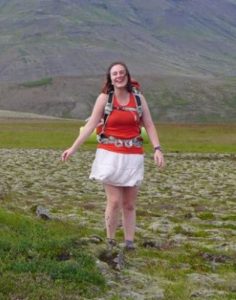 About Me: I received my BA in English with Linguistics from the University of Alabama at Birmingham in 2014 and my MA in Scandinavian Studies (philology focus) from UW-Madison in 2016. I participated in the Árni Magnússon Institute’s International Summer School in Manuscript Studies in Reykjavík, Iceland in the summers of 2016 and 2017 and am currently the Graduate Language Program Coordinator (GLPC) for Norden House, the Nordic language residence hall. I have formerly been a Project Assistant for the Journal of English and Germanic Philology and have spent time in Germany, Iceland, and Norway. My interests include medieval literature of the Old Norse and English persuasion, Germanic philology, and early medieval Germanic poetry. I am especially interested in the linguistic ritualization of grief, death, and dying and in medieval North Atlantic narratives of Christianization. I also enjoy crocheting enormous afghans, writing poetry, and watching poorly directed films.

– University of Wisconsin-Madison, MA in Scandinavian Studies (philology focus) (2016)
– University of Alabama at Birmingham, BA in English with Linguistics (2014)