Evjue-Bascom Professor in the Humanities 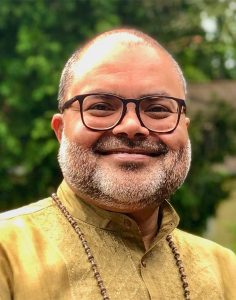 About: B. Venkat Mani is Professor of German and World Literatures, former director of Center for South Asia, and currently the Race, Ethnicity and Indigeneity (REI) Senior Research Fellow at the Institute for Research in the Humanities. He is the author of Cosmopolitical Claims: Turkish German Literatures from Nadolny to Pamuk (University of Iowa Press, 2007) and Recoding World Literature: Libraries, Print Culture, and Germany’s Pact with Books (Fordham UP, 2017; winner of German Studies Association’s DAAD Prize and Modern Language Association’s Aldo and Jeanne Scaglione Prize for Best Book in German Studies 2018). Mani has edited or co-edited several volumes including German Quarterly’s Forum “World Literature: Against Isolationist Readings” (2021), and A Companion to World Literature (Wiley Blackwell 2020). He’s published widely in many academic journals in the fields of World Literature, German Studies, Comparative Literature, South Asian Literatures, Migration and Refugee Studies, and Book- and Library Histories. His public humanities essays can be read in in Inside Higher Ed, Telos, The Wire (Hindi), The Hindustan Times, and The Indian Express. Mani is currently working on a monograph on refugees and the global novel.

Apart from several student-nominated teaching awards, Mani has received fellowships and grants from the Social Science Research Council; the Andrew Mellon Foundation’s Sawyer Seminar Grant; the Alexander von Humboldt Foundation’s Experienced Researcher Fellowship; the US Department of Education’s Title VI Grant for Center for South Asia; and a DAAD grant for UW’s Center for German and European Studies. In 2018, he was a residential fellow at ZfL Berlin. Mani has served on numerous Diversity, Equity, and Inclusion committees on campus and nationally. He was one of the Diversity Liaison Fellows for the Office of the Chief Diversity Officer (2019-21), and currently serves as a friend-mentor for the Mercile J. Lee Scholarship Program.

Affiliated Departments: IRIS (Institute for Regional and International Studies); Center for the History of Print and Digital Cultures