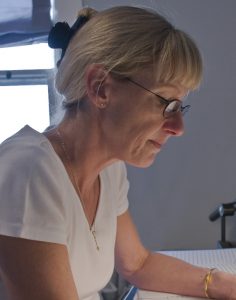 About Me: I am Birgit Baldwin Professor and Torger Thompson Chair. I am a native of Denmark. I received my M.A. and Ph.D degrees in Scandinavian languages from University College London and my B.A. Hons. in Icelandic and Norwegian at the University of Iceland. I joined the Department in the fall of 2001, where I teach a variety of courses on Old Norse-Icelandic language and literature and Scandinavian linguistics. My research interests include Old Norse-Icelandic language and literature, especially paleography and philology; hagiography; and color studies. I have published several books. The most recent are The Vikings: Facts and Fictions (with Tristan Mueller-Vollmer) (2018), The Saints in Old Norse and Early Modern Icelandic Poetry (with Natalie M. Van Deusen) (2017), The Legends of the Saints in Old Norse-Icelandic Prose (2013), and A female legend fom Iceland: “Kirkjubæjarbók” (AM 429 12mo) in The Arnamagnæan Collection, Copenhagen (2011). My book, The Priest’s Eye: AM 672 4to in The Arnamagnæan Collection, Copenhagen, is forthcoming in the Manuscripta Nordica series. I am currently working on three book projects. One (in collaboration with Dario Bullitta) is an edition entitled Three Humanist Compendia in Danish and Icelandic Translation. The edition has been accepted for publication in the Bibliotheca Arnamagnæana series, but we still have to make some revisions. Another (in collaboration with Carole Biggam) is a six-volume work entitled A Cultural History of Color. Carole Biggam and I serve as co-general editors of the work and as editors of the volumes on Medieval and Enligtenment. The third (in collaboration with Dario Bullitta) is an anthologly of essays tentatively entitled The Saintly Splendor of Medieval Iceland. In addition to books, I have translated several sagas into Danish and published approximately 80 articles on a variety of topics within the field of Old Norse-Iceland, including editions of religious texts, non-verbal communication, gender dysphoria, and color terms.