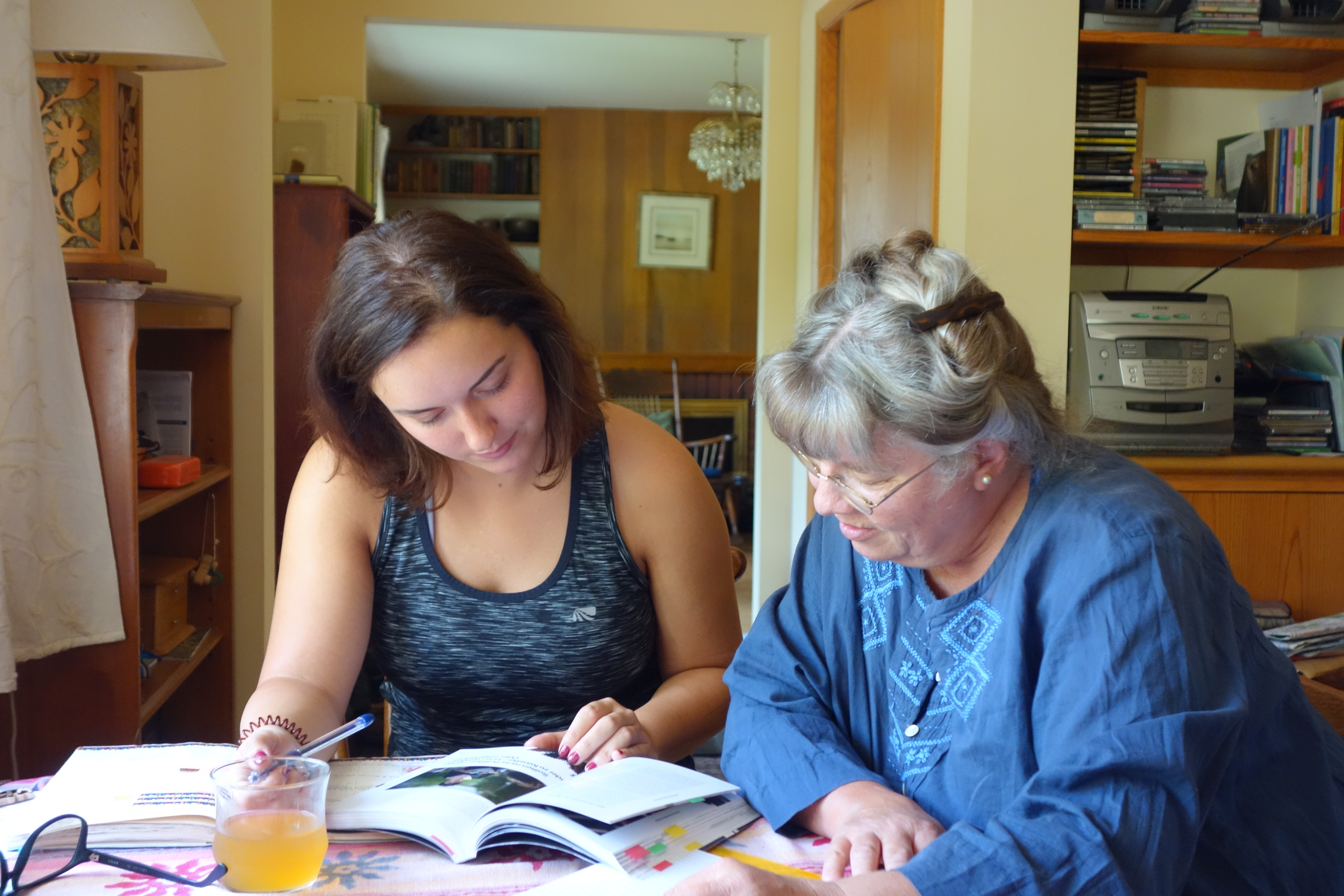 Leighty Hanrahan is not your average UW-Madison student. As a triple-majoring Honors student and recipient of multiple undergraduate fellowships, she has not only set her sights high, but is reaching those heights with her most recent academic undertaking. Leighty’s Senior Honors Thesis project titled Facts within Fiction within Art: German Literary and Artistic Responses to the European Refugee Crisis delves into the European refugee crisis through the lens of contemporary German literature and art. This past year Leighty received both a Hilldale Award and an Honors Summer Research grant for her project, which enabled her to do fieldwork in Germany and assemble first-hand information and accounts from artist-activists, teachers, and refugees. The project is being done in collaboration with Professor Sabine Groß of UW Madison’s Department of German, Nordic, and Slavic.

“Leighty Hanrahan is a truly exceptional student. Working with her is a delight: she combines intelligence, a passion for inquiry, and the ability to tease out the meaning of challenging texts to a remarkable degree while also possessing outstanding proficiency in German.” -Sabine Groß

We recently talked to Sabine and Leighty about the project and how its unique approach can shed a new light on this ongoing crisis.

The ongoing European refugee crisis has generated a variety of political, economic, and social responses within Europe and around the world. In 2015, Leighty taught English and German in a refugee camp in Bensheim, Germany. Her “students” ranged from 17-year-old Iranian men who had never learned the Latin alphabet before to Syrian doctors with proficient English. It was this experience in combination with classes she took in the German Program that inspired her to develop her Senior Honors Thesis project. Leighty will examine the relationship between literary and other art-focused reactions to the refugee crisis, including an in-depth investigation of German author Jenny Erpenbeck’s remarkable novel “Gehen Ging Gegangen” (Go Went Gone), which offers a thoughtful and complex portrait of an encounter with a group of refugees.

“I already knew Leighty as an outstanding student when she approached me with a promising and ambitious Senior Honors Thesis project. Working with a very current text (Jenny Erpenbeck’s “Gehen, Ging, Gegangen”, 2015; English translation “Go, Went, Gone”, 2018), then adding two levels of contextualization – nonfictional texts plus an exploration of artistic initiatives focused on refugees – makes this a uniquely rich and ambitious project.”
-Sabine Groß

1. Can you tell us bit more about what this project is addressing the European Refugee Crisis?

My project focuses on the depiction of the refugee crisis in contemporary German literature and art, and how these depictions can be used to teach/inform people about the issue at hand.

2. What type of impact to you hope to have by doing this project?

This genre, “Flüchtlingsliteratur,” is up and coming in Germany (and elsewhere). I hope to understand and explain why German authors and artists feel an urgent imperative to present this topic to the public in particular ways.

3. Why do you think this is an important issue to talk about?

This is an ongoing issue in Europe, and the responses have been mixed (i.e. a rise of right-wing populism, splintering within political parties, etc.). All too often is there an emphasis on news and media, while the artistic and literary responses tend to be more nuanced and offer senses of humanity that the media may not.

4. Do you think this project has relevance/meaning to a non-European audience?

Of course! As I mentioned before, many parts of the world outside Europe have also been curious about this ongoing humanitarian crisis. There are also parallels to be drawn between these trepidations in Europe and those in other parts of the world (like here in the US).

5. What drew you to this project and working with Sabine on it?

Last year, I received “Gehen, Ging, Gegangen” by Jenny Erpenbeck as a Christmas present from my parents. This book piqued my interest and I began a discussion with a couple of professors in the UW German Department about it, including Professor Gross. When the time came, I found it fitting to choose Prof. Gross as my senior thesis mentor.

6. What mediums of art will you be featuring in this project?

There is certainly more to be discovered. So far, I have been looking at sculptures and performance art from the Center for Political Beauty (see response below), paintings made by Syrian artists in Berlin, and drawings by child refugees who currently do not possess the German/English language abilities to tell their own stories about their journeys to Europe.

7. Do you have any specific artists that stand out to you personally?

So far, I have been focusing primarily on German artistic initiatives, museum installments, and protest art. For example, Zentrum für politische Schönheit (Center for Political Beauty) is a group that aims to “preserve humanitarianism” and combat right-wing populism and racism. I coincidentally met the Foreign Minister of the Center for Political Beauty in Berlin this summer and learned all about the group over coffee with him.

8. Do you think that literature and art provide a uniquely effective way of addressing the European Refuge Crisis that other media cannot do?

Certainly. Both literature and art can be employed as a means to make readers/viewers feel more connected to the situation. While the media does indeed provide the facts and statistics, the humanity can sometimes be lost and it becomes easy for “point-and-click perusers” of news to dissociate from these problems.

Triple-Majoring, with Honors in the German Major: (B.A. degree expected May 2020) Areas of Study: Majors in Political Science, International Studies and German with European Studies Certificate.