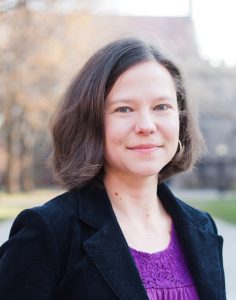 About: Hannah Vandegrift Eldridge is Associate Professor of German in the Department of German, Nordic, and Slavic at the University of Wisconsin-Madison. She works on German literature and culture from the 18th to 21st centuries, with a focus on lyric poetry, philosophy and literature, and the interactions between sound and text. Her first book, Lyric Orientations: Hölderlin, Rilke, and the Poetics of Community appeared in Cornell University Press’s Signale series in 2015, and she has published articles on Friedrich Hölderlin, Rainer Maria Rilke, Stanley Cavell, Paul Celan, Ludwig Wittgenstein, Durs Grünbein, Friedrich Gottlieb Klopstock, and Friedrich Nietzsche. She is currently working on a book project on metrical theory and practice in Klopstock, Nietszche, and Grünbein.