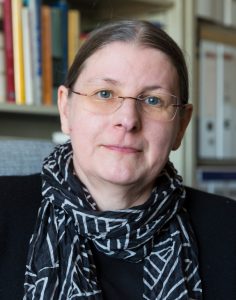 About: Sabine Mödersheim is Associate Professor of German Literature and Culture in the German Department. She currently serves as the Director of the Center for Early Modern Studies. Education: Dr. phil. (German and Philosophy, Albert-Ludwigs Universität Freiburg); teaching positions at the Universität Freiburg/Germany and McGill University, Montreal.

Her research interest are in the areas of literature and culture from the Renaissance to the present, in particular the German and European emblem tradition and visual culture, the use of images in architectural decorations, popular culture and propaganda. She serves on the advisory board of Emblematica and on the editorial board of Monatshefte für deutschsprachige Literatur und Kultur. As Director of the UW Center for Early Modern Studies she organized the conference ‘Spiritual Optiks‘: Jesuits and Visual Culture and edited a volume on The Art of Persuasion: Emblems and Propaganda.

She is a member of the research cluster “Environmental Futures” at the Center for German and European Studies and the Nelson Institute’s Center for Culture, History, and Environment (CHE) at the University of Wisconsin, with a focus on the history of environmental grass roots movements in Germany as well as environmental policies and best practices in urban planning.