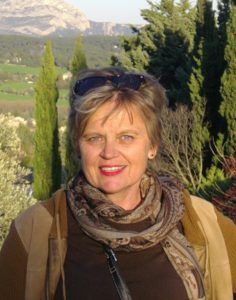 As the 2021 Madison Polish Film Festival is back in full swing on the UW–Madison campus, the UW Polish Studies program has another reason to celebrate. Earlier this month, Dr. Ewa Miernowska, the program’s long-serving Polish language lecturer, was elected for special recognition at the 2021 Polish Film Festival in America.

The 2021 Polish Film Festival in America (PFFA) in Chicago kicked off on Saturday, November 6, with an official gala combined with the screening of Back Then by Kinga Dębska. The comedy, set in 1980s Poland, premieres at the Madison Polish Film Festival on Sunday, November 21. During the opening gala, UW–Madison Polish Studies long-time Polish language lecturer Dr. Ewa Miernowska received a prestigious distinction from the Chicago Society for Arts for her outstanding merits in promoting Polish cinema in North America. The annual Polish Film Festival in America is the largest event of its kind in the United States.

“It is precisely people who promote Polish cinema in the world day after day, over the years, who stand anonymously behind the curtains, who devote a tremendous amount of time, often with their own means, spreading their passion to others, it is they who have made a significant and measurable contribution to the numerous successes of Polish cinema in the last 25 years. And for that, they deserve a big thanks,” said Krzysztof Kamyszew, founder of the Polish Film Festival in America and Executive Director of the Chicago-based Society for Arts.

In addition to a special diploma of recognition, Dr. Ewa Miernowska also received a graphic film miniature created by the famous Polish artist Artur Popek, author of numerous posters for the PFFA and other Polish film festivals in America. Known among her students as pani Ewa, Dr. Miernowska was recognized alongside seven other promotors of Polish cinematography from several U.S. cities as well as the Netherlands.

The PFFA recognition is yet another one in Dr. Miernowska’s collection. In 2011, she traveled to Warsaw, Poland, to accept the prestigious Polonicum Award Distinction from the Center for Polish Language and Culture for Foreigners at the University of Warsaw. The Center recognized the GNS+ Slavic Studies unit, which back then was still the Department of Slavic Languages and Literature, for its achievements in teaching and promoting Polish culture. A few years later, Dr. Miernowska received a Mid-Career Award from the College of Letters & Science. The College awarded her for her innovation in teaching Polish, for outstanding mentoring of students, and for extraordinary outreach activities, with the Madison Polish Film Festival being the prime example.

30 Years of Polish Film in Madison

Established in 1989, the Chicago-based Polish Film Festival in America has closely collaborated with the Madison Polish Film Festival since its inception in 1991. Launched by Dr. Ewa Miernowska, the festival has quickly become an annual celebration of Polish cinema. Since then, it has attracted hundreds of viewers each year and is now a major cultural event at the University of Wisconsin–Madison and the Greater Madison Area.

More from the #UWPolish blog:

Chopin and the Caribbean: Film & Music Event in Madison Explores Composer’s Unknown Connection to the Americas

Educating the Wisconsin public about the Polish language, literature, and culture since 1936.

The University of Wisconsin–Madison Polish Studies Program is the oldest academic program in the United States focused on the study and teaching of the Polish language, literature, and culture. UW–Madison Polish studies offer a comprehensive package of Polish language, literature, and culture courses, a generous scholarship program designed exclusively for its students, and various extracurricular activities each academic year.

The program, dating back to 1935, offers beginning, intermediate, and advanced Polish language courses, in addition to intensive Polish courses for heritage speakers and (under)graduate students. In 2011, the program received the prestigious Polonicum Award Distinction from the University of Warsaw for its achievements in promoting the Polish language and knowledge about Polish culture and history. The UW–Madison Polish program also offers a broad range of Polish culture courses on Polish film, contemporary Polish culture, Polish migration to the Americas, a survey of Polish culture from the Middle Ages to modern times, Polish comedy culture, and post-communism.

Each year, the UW Polish program awards scholarships for tuition through the Lapinski fund to undergraduate and graduate students studying the Polish language, literature, and culture. The Polish Student Association (PSA) provides a space for all students interested in events, activities, and learning about Poland and Polish culture. In collaboration with the Polish program faculty, the PSA also co-organizes the Madison Polish Film Festival, an annual celebration of Polish cinematography in Madison, Wisconsin, now in its 31st edition.